The FED has been holding the base interest rate at 0.25 for more than 3 years now. Euro Zone and British interest rates have similar graphs as well, they are all at historical lows after the 2008 economic crisis. The reason they are doing this is to keep troubled banks afloat and prevent a repeat of Lehman Brothers type big bankruptcy.

While the economy is protected from the damage of a shock, it is now subject to a slow and addictive erosion.

Cheap credit leads to malinvestment
A well known side effect of low interest rates is suboptimal investment decisions. Once the bar is lowered, the pressure to achieve is alleviated. Investments that would normally fail, start to look viable and those that are viable tend to form bubbles. While the general public understand that the latter is destructive, they are more forgiving to the former. It hides nasty effects of business failure, like unemployment, dereliction of neighbourhoods and such.

As a web business your competition is still brick and mortar businesses
Make no mistake, brick and mortar businesses are dying. They are not going to disappear tomorrow but day by day you will be seeing less of them. It will probably take decades but these businesses, unless they are selling an experience, will disappear. The volume of business however will remain unchanged, if not bigger, and be on the web.

A brick and mortar business is categorically a malinvestment. Cheap credit delays the inevitable for  these businesses. They typically have overheads in rents, staffing and stocking. Their margins are low and they only look viable in a low interest rate environment. The immediate downside is, every penny these businesses make is at the expense of a web business, which could do the same job more efficiently. Your central bank is effectively propping up your competitor. Not that it can change the inevitable result, but it is adding extra time to the game.

Takeaways for entrepreneurs
Knowing the end result and having a bit of time can be beneficial, though. Here are some ground rules using that time:

Are you ready for the next stage of commoditization of web design?

If you are not familiar with what commoditization is, here's a description from Wikipedia:


Commoditization is the process by which goods that have economic value and are distinguishable in terms of attributes (uniqueness or brand) end up becoming simple commodities in the eyes of the market or consumers.

This is exactly what's happening to web design as an industry. Commoditization generally starts from the lower end and spreads to higher levels as time goes by. It has been in full swing in the lowest end and now it is starting to spread up.

Current state of affairs
At the bottom end, it has been long since the prices of themes for popular blogging platforms, forums and CMSes has fallen as low as a backlink to designer's web page. This didn't hurt anybody because people who demand these themes were not willing to pay for design anyway.
Than came ThemeForest and swept the segment which was ready to pay for design but didn't have much to spend. They also built inroads to an upper segment: start ups and small web businesses. They don't sell just themes but PSDs and  HTML templates. While these are cheapish to buy, there's still a cost of added effort to integrate them with a web site. Inroads haven't lead to domination, yet.

Interchangeability leads to commoditization
You probably heard about Bootstrap. It's not the only CSS framework in town but it surely is the most popular. It used to suffer from what all the others do: your site looked similar to others that used the framework. Sure it offered some customization but it was limited and you still had to put in some effort to make it look the way you wanted.

Enter Bootstrap 2.0, we have a highly customizable CSS framework in our hands. It is great news if you are a visually challenged developer looking to spice up your new project's looks. Find a colour palette, apply it to your less file and you are done. As long as your HTML is Bootstrap compatible you can upgrade to something better later on, with just unzipping a file to your assets folder.

This is not so good news for designers as it removes the urgency for a bespoke design for start ups. Furthermore, designs become interchangeable, which triggers a race to the bottom for design prices. Just look at the price at this market place for Bootstrap themes. Wait till bigger players like ThemeForest to catch up and see where they go.

How to prepare
There are 3 type of survivors in a commoditized market:

The bitter reality is only a small number of actors survive whatever their strategy. If I were making my living from web design, I would be looking into new pastures.

Hang around in any community about web design and you will stumble on a post asking for advice on how to get a nice looking logo on the cheap. I always answer with "you don't need one, spend your money on something that really matters" and then watch my comment down voted into oblivion. Let's see if it helps when I put my reasoning behind it.

Why do you think you need a logo?
It is probably because it is conventional wisdom and it has its roots in traditional publishing. Imagine you are in the business of selling deadwood by printing somewhat actual news on it, this is where your product is presented to your customers: 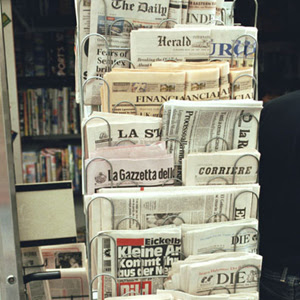 Not too much opportunity to make an impression on an impulse buyer... You have to distinguish yourself from others with a few basic clues: monochromatic serif fonts suggests that your are a serious paper.  More colours and sans-serif tell that your paper is more of a light reading material. A website's equivalent of news stand is a SERP or a social bookmarking site. You don't get to choose how you look in these anyway.

Why most websites don't need a logo?
Because conventional wisdom is not always right. It tells you to have your website in flash if you are a restaurant owner, have music playing in the background if a photographer. Conventional wisdom on website logo is wrong because:
Why you need a good favicon?
Your websites news stand moment is when a visitor opens multiple tabs on a SERP. If you can get the visitor to click on your tab ahead of others, that's  a bonus. A distinguishable favicon might give you the edge here. However return on investment can still be very low for this scenario.

You will probably not listen to some random guy on internet and ditch your logo. But do yourself a favour and run some A/B tests to see if it really matters before you spend any money on a new logo.
Posted by LaaT at 10:13 AM 2 comments: